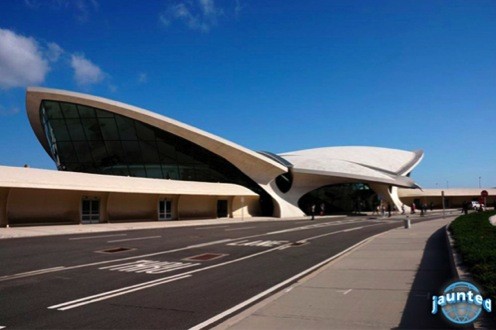 Well, this is certainly an interesting twist. The old TWA terminal at JFK International Airport may turn into a JetBlue Hotel. A source familiar with the bid tells us this will NOT be a JetBlue-branded hotel. JetBlue is just a minority investor. We’ll still hold out some hope for cool partnerships with the airline, whose main terminal is just across the way.
The Wall Street Journal reports that the airline has partnered with developer MCR Development LLC, and the duo are now in negotiations with the Port Authority of New York and New Jersey. Even better, they’ve apparently emerged the “preferred bidder.”
Naturally, JetBlue must have been a bit green about the debut of Virgin Hotels earlier this year but given that JFK is JetBlue’s home airport, and where the budget airline first originated, this is the perfect spot to launch their hotel business. There aren’t many details on the scope of the project other than it will have 500 rooms or so.
While this is exciting, it could fall apart as so many other deals have with this iconic terminal, designed by architect Eero Saarinen. In the past five years or so, Marriott Hotels, Ian Schrager, Andre Balazs, Yotel and Donald Trump have all made moves to turn the terminal into a hotel but all have failed for various different reasons. So we fully expect to spend more time at the gate with this flight.
[Photo: Jaunted]