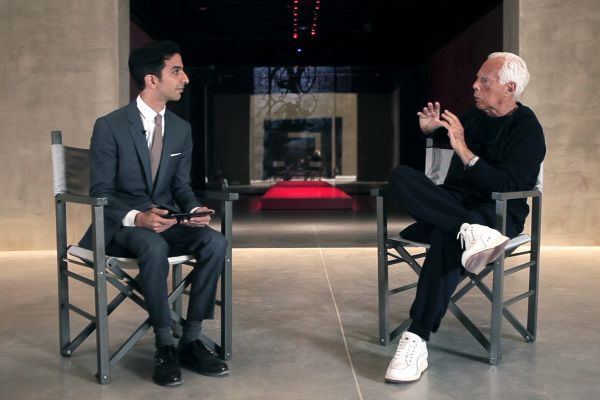 MILAN, Italy — The words ‘legendary’ and ‘iconic’ are thrown around so frequently in fashion these days that they have started to lose meaning. But used in the appropriate context, they can still be powerful descriptors for those who have genuinely made a lasting impact on the industry.

Christian Dior gave us the New Look, Yves Saint Laurent paved the way for ready-to-wear, while Coco Chanel liberated women from their corsets. Each of them is worthy of the monikers ‘legendary’ and ‘iconic’ — but they are now gone from this world, their fashion histories already written.

But to be a living legend like Giorgio Armani is an altogether different matter. With a business earning annual revenues of more than €2 billion (about $2.2 billion), Mr Armani is still working as hard as ever, yet at the age of 80 he seems to be thinking more and more about securing both his personal legacy and the future of his fashion empire.

“Forty years of career is indeed a major milestone. I got into fashion almost by accident and then it slowly grew in me until it completely absorbed me, stealing my life away,” reflected Mr Armani, in an exclusive video interview with BoF, filmed just days before the star-studded opening of Armani/Silos, a new 50,000-square-foot museum housing the designer’s vast archive.

As we toured the building, construction workers were still putting their final touches on the space, models were posing for shoots for various international magazines and hundreds of mannequins were being dressed in Armani’s signature ‘greige,’ fluid and unstructured clothes.

Taking a moment to look back on his journey, Mr Armani said: “If you make clothes that are not part of the world we live in, they will be meaningless. This is very important and it is the real reason why I’m still here after 40 years, the reason why I get upset when things are not done the way I want.”

Indeed, with his infamous need to control every single aspect of every single manifestation of his brand, Mr Armani was also there to oversee —and micro-manage — every last detail of the opening of Armani/Silos. This is not a man to leave the definition of his legacy to anyone else and his relentless focus, discerning eye and business judgment have been the keys to his undeniable success.

But the 40th anniversary has also re-surfaced more practical, nagging questions about the future of the Armani business. How long can Mr Armani continue to oversee the enterprise? Who might take over from him as designer when he is unable to continue working at this frenetic pace? And, how might the business — now a behemoth incorporating numerous sub-brands and collections — need to change in order to adapt to the fast-changing fashion landscape and relentless pace of today’s fashion trends.

On the issue of succession planning and the ownership of the business, Mr Armani remains confident that he can continue for several more years, but acknowledges that the time is near when it won’t be easy to work this hard. “I never expected I would be 80 and have the success that I have,”he says. “The fact remains that you cannot work or stay lucid forever and, of course, I’m going to have to deal with that, too. For now I think I’m still getting along quite well.”

“There are a few [potential] solutions for the future,” he allows, when pressed on how he might ensure the continuity and stability of his business. “Selling to a large group, which I exclude, putting the company on the stock market with a board of directors made of strong people, creating a foundation, for example… these are all possibilities. However, I think this is something we should be discussing in a few years, or even ten years.”

In other words, don’t expect any big changes in the company’s creative or business strategies any time soon. He will continue on the path he has carved, he says, rejecting criticisms in some quarters that the brand’s image and collections have become monotonous.

“You can be creative in different ways. You can be creative without worrying about business or industrial issues, like an artist, who doesn’t care about selling,” he reflects. “Then there’s a kind of creative who works alongside the industry. That is the American model of business and I embraced it myself as a philosophy and a way of working. Then, as now, I could not see the point of doing creative work for its own sake.”

“As long as my stores continue to sell and there is still demand from customers and nobody can copy my products, then it means I made the right choice and my brand will continue to be talked about,” he continues.

And while other brands including Dolce & Gabbana and Marc Jacobs are taking steps to consolidate their diffusion lines under single brands, offering products at multiple pricepoints, what about Mr Armani’s sprawling brand portfolio that runs the gamut from Armani Privé haute couture to Emporio Armani ready-to-wear to high-street Armani Exchange?

“I have built a world made of totally different brands — Emporio Armani, Collezioni, Privé— which have worked in time and I don’t think it was confusing because there’s a story, a style, a different quality and price point behind each brand,” he offers. “Perhaps those who have followed my example by offering many different brands have realised that not all of them worked, not all of them yielded good results, so they reduced and consolidated their portfolio. As for me, right now I don’t see the need to remove any brands because they work, they have their customer base. Why should I create a problem where there isn’t one really?”

But while Armani remains sanguine about the business and its underlying strategy, he does have some regrets about the sacrifices he has made on the road to his success.

“My biggest, most obvious regret is that I didn’t take enough care of myself. I have always taken care of other people more than myself, so much that sometimes I should have quit my job, or divided my time between public and private life,” he reveals. “I could never do it, though, because this is a job that absorbs you completely from morning to night. I tried to take people, friends, or dates and bring them into my own work life, instead of doing the opposite; I didn’t go out of my working sphere to get to know the outside world, but I brought the world into my history, into my own small world.”