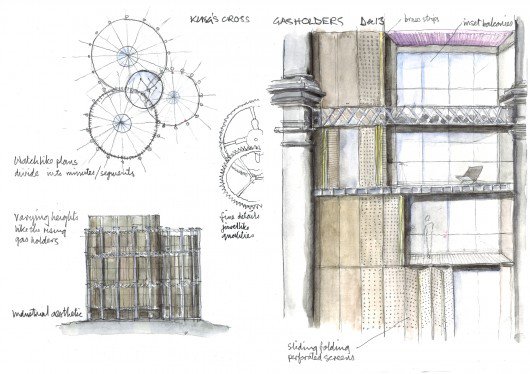 London-based Wilkinson Eyre Architects have revealed plans for a major refurbishment of three ‘Siamese’ gasholders in King’s Cross. The development will see the historic structures restored and repurposed for multi-residential use, and create over 140 apartments. Dismantled in 2001 to allow construction of the Channel Tunnel Rail Link, the Grade II-listed structures are currently undergoing refurbishment by Shepley Engineers in South Yorkshire, after which they will be relocated from their original site as part of a larger masterplan for King’s Cross.

Constructed in 1867 from the designs of John Clark, the trio of gasholders were initially erected at Goods Way, Kings Cross between 1879 and 1880. The 123-column cast iron structure is notable as the only co-joined gas holder ever developed in London. A remnant of the city’s industrial heritage, the gasholder triplet was designed to accommodate ‘telescoping’ gas storage bells, before falling into disuse with the relocation of heavy industry to city outskirts.Wilkinson Eyre’s Gasholder proposal was the winning entry of a 2005 design competition seeking residential designs utilizing the tripartite frame as part of the King’s Cross masterplan. Circumscribed within the three cast iron frames, the development proposes three “drums” of accommodation at differing heights to evoke the movement of the original gas holders, which would have risen and fallen depending on the pressure of the gas within.
The three volumes will contain “pie slices” of studios and 1-, 2-, and 3-bedroom apartments, and retain ‘the strong industrial aesthetic and raw physical materiality’ of the original structure. At the junction between the three will lie a ‘fourth, virtual drum shape’ containing an open courtyard for residents. Independently supported and offset from the gasholders, the residential buildings will be clad in a modular system of steel and glass overlaid with adjustable shutters.

The Gasholders project is due for completion in the fourth quarter of 2017.