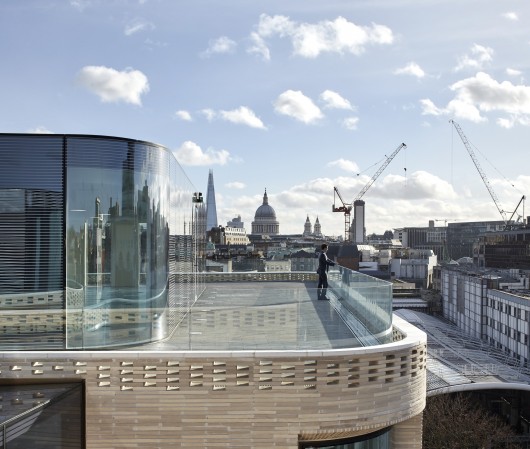 63 Clerkenwell Road was built in the 1860s as a stable for the adjacent railway. More recently it had been used as office studios, a nightclub, a gym and restaurant. Originally, Derwent London commissioned Piercy&Company to refurbish the existing building, seeking to improve both the ground floor relationship with the street and the quality of internal spaces. Planning permission for this scheme was granted in 2007, but detailed design revealed a series of complex and costly issues with the existing structure which would have led to severely compromised spaces. A new build scheme offered a significant improvement to the public realm and also much better volume and light to the office floors.

Turnmill draws inspiration from the historic fabric of Clerkenwell and its present day incarnation as the centre of London’s creative media industries. The curved plan form is a direct response to the movement of people around the busy site which is set to intensify as Farringdon Crossrail opens in 2018. Clerkenwell’s quintessential robust yet refined warehouse buildings provide a guiding template, while the concept is inspired by Barbara Hepworth’s renowned sculpture ‘Curved Form Delphi’ comparing the vernacular of ancient and modern Greece. The skin on the outside of Hepworth’s sculpture is textured and articulated, yet inside it is pure white and carved from the overall form.

The new building successfully negotiates the complex relationship between new and old, referencing the hi storic and the contemporary. This is most clearly demonstrated by the brick façade which is both sensitive to its context and visually striking. Handmade bricks were sourced from Petersen Tegl in Denmark in three bespoke shades, developed to be sympathetic to the neighbouring Grade 1 listed Sessions House. The Roman format bricks create a horizontal emphasis across the façade and reflect the sturdy masonry characteristic of the area, whilst the handmade nature of the surface is exploiting by using the brick on edge to create sills and soffits and handsetting all the brickwork with the exception of the pre-cats soffits. A range of special moulds were fabricated to create curved and angled bricks which achieve the complex geometry of the plan.

To emphasise the feeling of movement, the mortar joints are recessed horizontally and filled the vertically, creating variation dependent on the height of the sun and depth of the mortar joint shadow. To form a more vertical fenestration pattern and add further articulation, the window reveals are deep and chamfered on plan fanning out from the centre of the office floors to take advantage of the unusually panoramic views. En-masse, the varied chamfers animate the façade and create variation, often a challenge with speculative office development.

On Turnmill Street, the brickwork continues inside through the curved entrance where it gives way to a palette of polished concrete, polished plaster, and brass detailing. The double height reception space and glazed link above break the massing into two elements in order to preserve the established grain of Clerkenwell. The curves and inset glazed link create more informal and varied internal spaces adding to the character and personality of the building. A continuous ribbon of external terrace celebrates the spectacular views from the set-back top floor and a similar arrangement of street level restaurants animates Turnmill Street and the junction with Clerkenwell Road.

Many of the fine details of the building repeat internally with curved reception walls, lifts and balustrades; the chamfered window reveals also appear within walnut cabinets in the washrooms. The offices have low level fresh air supply system similar to displacement ventilation coupled with openable windows. The lighting utilises a flexible track arrangement which is recessed into the soffit combining lighting and detection. Ground source heat pumps provide free heating/cooling throughout the year. 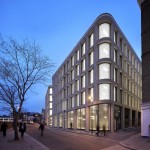 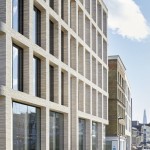 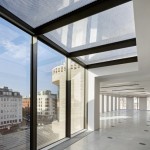 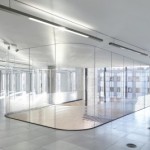 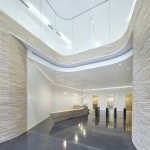